Shino-Odori is one of the main characters and potential love interest in Legend of the Willow. She first appears in Season 1 Episode 7 as a yokai.

Shino-Odori lives in the cave near the shinobi village. Mei (default name of the main character) first met her when she was traveling with Kazu. At that time Shino-Odori only appeared in front of Mei and was hoping for Mei to help her but when she found out Mei only has one tail, she became upset and left. Mei met her again when she was assigned by Takao to help the shinobi clan and they bounded more when Mei helped her to retrieve her magic comb. She is very distrustful toward human, however she doesn't seem to categorize the shinobi and Masamune in the same category as other humans; telling Mei that they are similar to her and Mei. Depending on the player's choices, Mei can have good relationship and even romantic relationship with her.

Shino-Odori is very straightforward and always says what she thinks. She often calls Mei cute fox and she is protective toward her as she sees Mei as a lone yokai in human world. She likes food a lot. She is very touched when Mei regards her as a friend even though she claims she doesn't understand her own reaction to that statement. If you romance someone else, she will be supportive and inquisitive toward that relationship. 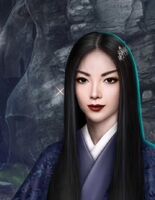 Shino-Odori in her human disguise 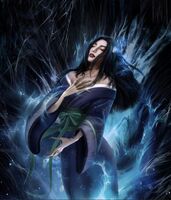