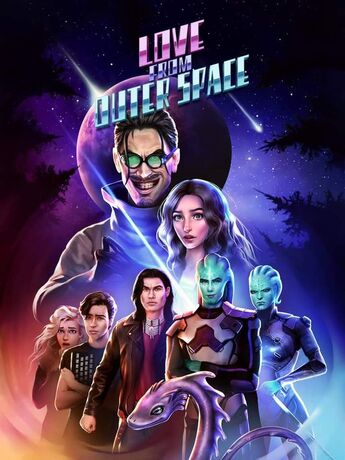 Welcome to the Love from Outer Space walkthrough.

This page is the walkthrough for Season 1. Click here if you are looking for walkthroughs for other seasons.

This is an ongoing book and this walkthrough is a work in progress.

What is a walkthrough? A walkthrough is an episode-by-episode guide that will reveal the effects each choice has on your character and the plot. Please note that these pages are always under construction as we learn more about each book.

Most choices you make for the Main Character in this book influence the following variables: 💫Stars, 🌎Earth, 👗Style, 🥇Sports, and 🧬️Science.

PLEASE NOTE: choices that have no significant effect on the plot (as in, no effect on game points and statistics) or that do not give interesting information on characters or backstories might have not been included in the walkthrough.

It is possible to balance your points to meet all skill requirements in this book.

Text written in Italic provides a summary of the episode and extra information.

DISCLAIMER: due to the very intricate nature of this game, where every choice you make sets into motion a complicated series of consequences, there are many possible game routes and scene combinations. As a result, the walkthroughs on this wiki might not be exactly identical to your game experience. If you experience something that is not covered in our walkthroughs, please leave a comment so we can update the page and add an extra possible route to our wiki.

Also please note: The descriptions of the scenes included in this walkthroughs might be paraphrases of what happens, so please don't take them as word by word copies of what is said in the book.

Do you have more questions or comments? Come and join us on the Reddit fan community!

In this season you will need:

[ You can balance your points for Style, Science, and Sports. ]

A prince from a faraway star has been betrayed, and now planet Earth is his new home. A normal girl who's an outsider in a new town comes to his aid.

Outfit Choice: When you are selecting your MC's appearance, the extra diamond outfits and hairstyles actually have an effect on the story later.

Hair Choice: When you are selecting your MC's appearance, the extra diamond outfits and hairstyles actually have an effect on the story later.

Choice: The ship is about to crash and there is only one escape pod. Will the Prince choose to save himself of his bodyguard?

Choice: Amber's dad asks her why she took so long packing

Choice: What do you think of your new home?

Choice: Your dad brings your old telescope in your room

Skill Choice: How will you walk through the halls at school?

Diamond Choice: Sarah is bullying you.

Choice: Amber makes a fool of herself by going into the wrong classroom

Choice: Your lab partner is not happy to work with you.

⏰Timed Choice: Extinguish the flames with... (It doesn't matter what you choose, but they all have fun results either way)

Choice: Will you choose to go home with Miranda?

Choice: Your parents ask about your day

Skill Choice: How will you decorate the room?

Choice: Choose who you want to talk to on the phone

Skill Choice: How to deal with the alien beast

Choice: Try opening it... (Correct option is random, you can try as many times as it takes)

Romance Choice: You now get to choose which face the Prince has while morphed to look human.

Amber comes face to face with real aliens. How will this close encounter of the third kind end?

Note: If you were successful at the timed choice:

Note: If you made at least one mistake in the timed choice, you get +1 stat instead of +2.

Choice: If they find out, I can't imagine what happens to...

Choice: I think I'll use... (You are busted no matter which way you go.)

Choice Agent Wolf: It's just that...

Choice: Who will answer?

The guests of our planet face one of the hardest trials in their lives - becoming humans... At least on the outside.

Choice: Start a rumor about... (Your rumor will spread around the town)

Path A Outfit Choice: How do you dress up?

Path A Outfit Choice: Which one?

Path A Hair Choice: Which one do you prefer?

Path B Choice: What do you prefer?

Path C Choice: What did you order?

Amber's no longer the newest girl in school. Ray and Ursula need to become students. What challenges await the aliens and the whole group?

Choice: What's the prince giving to you?

Choice: I'll distract him with...

S1, EP5: Covering Up The Tracks

Amber and her friends failed to cover their tracks, and now they need to find the way out of the scrape.

Choice: The thing that fell was...

Choice: They...(if you pick Unfortunately, no)

Outfit Choice: What do you put on your head?

Choice: How do you spend time with the pet?

Relationship Choice: Who do you spend some time with?

The raid lies ahead, but the group has no idea that they're walking straight into a trap

Choice: Who will start?

Choice: I'll tell you about...

Choice: Who will you be on guard with?

(Muster the courage to kiss Amber.)(17💎) Todd muster his courage ask Amber may he kiss her as they share a kissing moment

Have you ever kissed someone?(17💎) Miranda ask to teach her how to kiss and Amber gave Miranda her first kiss ever

⏰Timed Choice Note: Wait for the soldier to turn away

Note: ONLY if failed timed choice

Outfit Choice: What does Amber steal?

Amber faces her enemies in their own lair, and she'll have to muster all her courage to save her friends.

Note: different options is given based on your disguise

Ray notice Amber next to DOC

Note: options are at random pay attention. You get different sequence of options depending on the outfit you choose in disguise.

❕The servicemen won't forget this event

Hair Choice: what to make?

Bracelet choice: What to make?

With earthling traditions mostly figured out, the aliens experience the ups and downs of high school life.

Outfit Choice: Saw her as

Outfit Choice: How do you dress up?

The prince's pride makes Amber and her friends get into a new risky project.

Choice: We should start with...

Choice: What color will it be?

Choice: What about the airbrush?

Choice: You know what...

Romantic Choice: How about a kiss for luck?

⏰Timed Choice:.. Note: The choice is at random just pay attention (speed up)

⏰Timed Choice: You will be shown a sign 3x. Choose left or right depending on what the sign says.

⏰Timed Choice: You have to press "Floor it." at the correct moment 2x. Which is right around when your car's front is at the tail end of the other car.

Choice: If you fail one of your attempts you get a second chance.

⏰Timed Choice:... (When the drone is on the left choose "Slow down" or "Forward", and when it is on the right choose "Speed up" or "Backwards".

S1, EP10: Everything Around

A killer robot is about to invade the Earth, and so Amber and the gang are preparing a proper welcome.

S1, EP11: Preparations For The Invasion

Two battles are held on the Earth: Amber and her friends versus the killer robots, and agents versus drug dealers. But there's always room for human feelings in between battles.

Choice: Who's Amber working with?

Amber and her friends decide to have a slumber party to avoid worrisome thoughts about the upcoming battle.

Choice: What's next? (You could choose ALL of the activities)