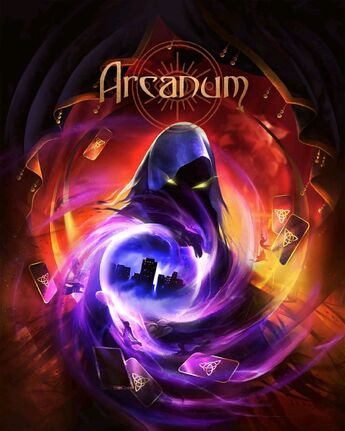 Welcome to the Arcanum walkthrough.

This page is the walkthrough for Season 1. Click here if you are looking for walkthroughs for other seasons.

This is an ongoing book and this walkthrough is a work in progress.

What is a walkthrough? A walkthrough is an episode-by-episode guide that will reveal the effects each choice has on your character and the plot. Please note that these pages are always under construction as we learn more about each book.

Most choices you make for the Main Character in this book influence the following variables: 💀 Emperor or 🌙 High Priestess. These variables will affect the plot of the story. Your choices are also affected by ⛓️ Redemption (High or Low Redemption can dramatically change your story and how others treat you) and 🎴 Major Arcana (The tarot cards will help you solve problems and lift the veil of the past and the future).

PLEASE NOTE: choices that have no significant effect on the plot (as in, no effect on game points and statistics) or that do not give interesting information on characters or backstories might have not been included in the walkthrough.

Text written in Italic provides a summary of the episode and extra information.

⚠️TRIGGER WARNINGS: Arcanum is a dark fantasy book and has sound effects and images that might scare some readers. Please proceed with caution! Be aware that in episode 3 it contains scenes related to death. In episode 5 some playthroughs may have a vague suicide scene.

DISCLAIMER: due to the very intricate nature of this game, where every choice you make sets into motion a complicated series of consequences, there are many possible game routes and scene combinations. As a result, the walkthroughs on this wiki might not be exactly identical to your game experience. If you experience something that is not covered in our walkthroughs, please leave a comment so we can update the page and add an extra possible route to our wiki.

Also please note: The descriptions of the scenes included in this walkthroughs might be paraphrases of what happens, so please don't take them as word by word copies of what is said in the book.

Do you have more questions or comments? Come and join us on the Reddit fan community!

In this season you will need:

An old woman curses a girl for her foul temper, banishing her and her entire city to a parallel world, but only the victim of the curse remembers who she is…

You get the "Nothingness" Card [+1 Major Arcana 🎴] (Note: The stats appears on the final screen.)

Choice: "Should I let him carry out the operation during my celebration?"

Choice: "You're the one who needs to take it easy, you impudent—"

Choice: "What should I say?"

You get the "Seven of Swords" Card [+1 Major Arcana 🎴] (Note: The stats appears on the final screen.)

Choice: "What should I do?"

Selena must accept the realities of her situation and the world she's found herself in. And there's clearly more than meets the eye...

Choice: You saw a... (The rooms do not affect anything. It is purely if you want a nice room.)

Choice: You put on a... (Do not affect anything. They are exclusively for your taste.)

Choice: "What should I do?"

The path of High Priestess 🌙: Selena (Lilith) realizes Liam and Josephine aren't lying to her about being a maid for them.

The path of Emperor 💀: Selena (Lilith) doesn't believe in anything that's happening. She thinks they are talking nonsense.

Choice: "Where to now?" (No matter which road you take, Selena (Lilith) always ends up back in the city.)

Choice: So what should I do?

S1, Ep 3: Ghosts of the Past and the Present

Selena is about to face another ghost from her past.

Path of Atonement: Josephine handed a tray to Selena. She calmly tells her to take it to Mr. Steltz. Then she asks Selena to get dressed first.

Since Selena isn’t looking for Atonement, Josephine isn’t happy with her work!: Josephine handed a tray rudely to Selena. She tells her angrily to get dressed and take it to Mr. Steltz. And to do it fast.

Choice: … (You can only ask one question. No effect on stats.)

Choice: At some point, the silence became unreasonably long.

You see a flashback to Selena's childhood at the orphanage.

Choice: Prima… (You can ask all three questions in any order until you choose the last option. No effect on stats.)

Choice: You collected a…

Choice: You managed to do a… (Do not affect anything. They are exclusively for your taste.)

You see a flashback of Selena's parents' funeral.

Choice: … (You can only ask one question. No effect on stats.)

Path of Atonement: One of the nobles looked at Selena sympathetically. She decided something was going on between Selena and the deceased, and that was why she couldn’t contain her feelings.

Because Selena doesn’t seek Atonement, people judge her!: The nobles were obviously bothered and insulted by the loud noise. They began to snort and angrily discuss what had happened. Arrogant remarks were heard from everywhere.

Choice: … (You can ask all three questions in any order until you choose the last option. No effect on stats.)

Choice: “What should I do?”

Choice: “What should I say?”

On your day off, you’ve got to find time for a date, a fight, and some trouble.

Choice: You ate… (No effect on stats.)

Choice: “Is the ball trying to show me something?”

You see a free CG image of Selena/Lilith holding a crystal ball.

Choice: You chose… (No effect on stats, but if you choose "Ginger beer" or "Rum" you will unlock an extra scene with Bert at the end of the episode.)

The path of High Priestess 🌙: Selena (Lilith) tells Parker she knows he is upset, but he needs to calm down. She then asks what is he accusing her of.

The path of Emperor 💀: Selena (Lilith) tells Parker not to dare touch her and for him to sleep it off before saying things like that.

Choice: So, she answered Bert’s question:

Selena will lift the veil of secrets. She won’t be able to remain uninvolved anymore.

⚠️ TRIGGER WARNING: Depending if you took the 2 Major Arcana's in Episode 4 your playthrough may have a vague suicide scene later in this episode.

You see a flashback to Selena's childhood at the orphanage.

Choice: Josephine did a… (Do not affect anything. They are exclusively for your taste.)

Choice: I want to… (This may have an effect on the next choice.)

If you got the "The Hermit" and “The Hanged Man” Cards in the previous episode you will see the cards again and you will have an extra scene and a flashback. [You saved the old man’s life!] [+1 Redemption ⛓️]

Choice: “I need to lie down, but that book haunts me…”

Path of High Atonement: Josephine came to her senses and rushed to Lilith with tears in her eyes. She says she's sorry and takes Lilith to her office.

Path of Low Atonement: Josephine doesn't move and asks what's wrong with her. She then tells Rob to put Lilith on the couch. Liam appears angry at his sister for not trying to save Lilith.

Choice: Next to her was sitting…

Time to pay a visit to an old acquaintance, the most guileful lady in Totspel.

[New episodes of this story are currently being developed. Romance Club plans to release them from October 9 to October 12.]